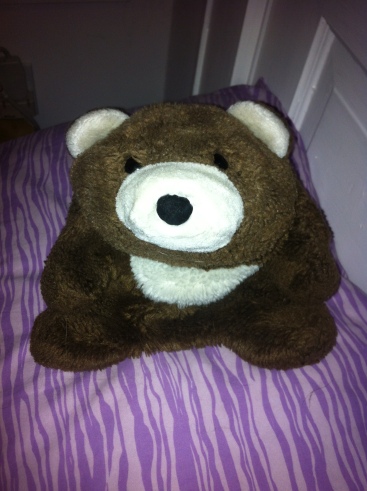 This is Macadamia Nut.  He is a Gund bear of the “Snuffles” variety, like many of the other bears around the house.  Andy first fell in love with the look of these bears when he was in college, even before he met Kristin!  He likes that they look more like actual bears than most teddy bears do.  His first bear was Malachi, who will have his own blog post sometime soon.  Back then, several of his college friends had this style bear as well, and a naming convention got started that all Gund Snuffles bears’ names begin with M.  This naming convention has been strictly followed in the Looney household ever since.  🙂  In later posts, I will introduce you to all the bears, but today is Macadamia’s turn.  🙂

Macadamia is on the small side for a bear, but fits perfectly in his cave on top of a cabinet in Kristin and Andy’s bedroom, where he resides with a log (yet another story to post!) and his brothers, Malachi and Stony (you’ll have to wait for Stony’s blog to see why Stony doesn’t start with M!).  They can’t live on the bed because the cats love them too much!

Macadamia was the second Gund Snuffles bear in the family.  Back when Kristin and Andy were first dating and working at NASA, Kristin got one of her terrible migraines.  Andy took her home from work at lunch time, then went back to work.  When he came back that evening, he had Macadamia in tow to cheer Kristin up.  Macadamia (and Andy!) have been cheering her up ever since.  🙂

But what made me think of Macadamia?  A silly song that came up the other day.  Kristin started saying, “bulbous bouffant blubber macadamia,” and I asked what the heck she was talking about.  She said it was an old Doctor Demento song, but couldn’t remember all the words, so I pulled it up on my phone and Andy streamed it onto the TV for us all to watch.  Neither of them knew it had a video.  This one seems to include Muppets, or something very similar.  In any case, I love Bulbous Bouffant (by The Vestibules)!  🙂