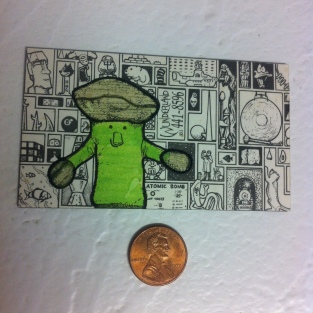 For those of you who don’t know, this sentient broccoli is named Tirade.  I will give him his own post sometime soon, but for now, I want to tell you about the rest of this magnet.  This piece was created by Lee Moyer, the same man who did the mural in the game room.  It was originally a postcard.  He created it by walking around Wunderland and just noticing all the cool things, then drawing them.  And he has soooo many cool, uniquely Looney things in this little drawing!  I can’t do them all justice now, so you’ll have to wait for the day when they each (or at least many of them) get their own post.  But some of the things of note are the gong that hangs in Andy’s office, the cats playing with some hanging pyramids, the yellow submarine (yes, it’s black and white, but we all know it’s yellow!), the Felix the Cat PEZ dispenser, the lava lamp, the Rubik’s cube, the Gund Snuffles bear, and the Atomic Bomb.  He really captured the Looneys’ style quite well!  🙂